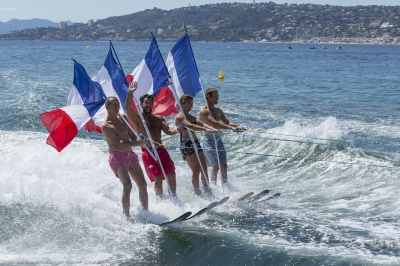 A waterskiing competition and display that shows some of the best artistic water skiing in France from the team at the infamous Belles Rives.

Since 1927 Juan Les Pins is a seaside resort very popular and very popular. With the emergence of motorboat, a real craze is raised for water skiing, social and aesthetic sport.

Sliding on towed water by powerful motorboats attracts the curiosity of the public and many tourists in the bay. It was during the same period that was founded the nautical club Juan Les Pins,

funded by the American billionaire Franck Jay Gould and Florence Gould is the president.

In 1932, Leo Roman and Emile Petersen contributed to the development of water skiing by creating the first club while making incredible demonstrations in the bay of Juan les Pins. Originally, it was old heavy alpine skis that were used. The first equipment factory was called "Toche & Lahupe" located between Juan les Pins and Golfe Juan. The success is immediate and the operation is repeated in Cannes and Nice.

From the 50s, Juan Les Pins remains a place of leisure and training for many faithful tourists, amateurs or professionals who wish to practice this sport freely and safety on the sea.

It is with Marc Grilli, pilot of the boats Chris-Craft and Riva of Leo Roman, who teaches since 1949 this discipline, that they will take their best lessons.

His son Marco Grilli, champion of water skiing, has succeeded him since 1966 at the head of the Belles Rives Ski Nautique Club.