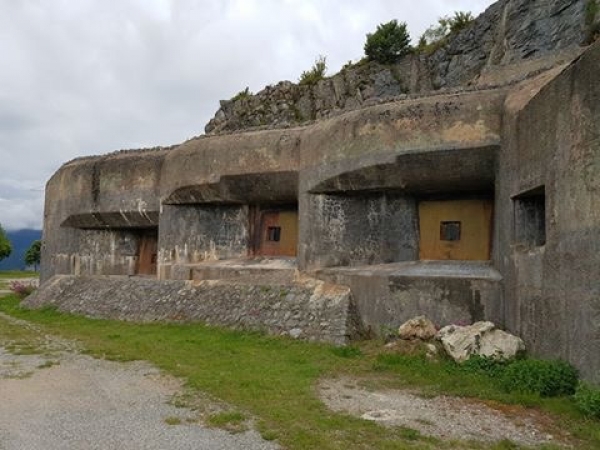 Originally called the Madeleine fortification, this was the Maginot Line's earliest ouvrage, or defensive work; construction began in 1928. The French government decided to build it after Mussolini's many sabre-rattling statements on the Nice region's Italian origin. The Alpes-Maritimes General Council later bought the site to turn it into a "place of remembrance". "Les Amis de l'Ouvrage Maginot de la Madeleine", an association formed in early 2008, has begun rehabilitating the inside and outside and opened the site to the public during the 2009 Open Heritage Weekend. Rimplas does not illustrate the concepts implemented in the later fortifications: it is in a single block surrounded by escarp walls whose blocks all face one way. They are veritable armoured casemates with 20cm-thick steel reinforcing the concrete walls, which extend inside and wrap around the cannon; two armoured shutters close the embrasure. The construction ran into many problems. First, the soil's crumbly nature required the excavated areas to be covered in concrete in several places. Second, there was severe water infiltration; in July 1936 cracks were still observed in the concrete. The fort was officially handed over to the 74th Alpine Fortress Battalion (BAF) in August 1937, before the work was totally completed. The Rimplas ouvrage has views stretching from the Upper Tinée in the north to Saint-Dalmas and La Colmiane in the west; its searchlights could scan the Upper Tinée road and the road to Saint-Martin-Vésubie. The fort could fire frontally towards the border, which was less than 5km away and ran along the present-day D2565 before the 1947 rectification. The frontier, which ran along the road between Isola, where a casemate stood, and Valabres, at the mouth of Mollières Glen, encircled nearly three-fourths of the town of Saint-Martin-Vésubie. Distance from Nice 60 Km, can be only reached by private transport