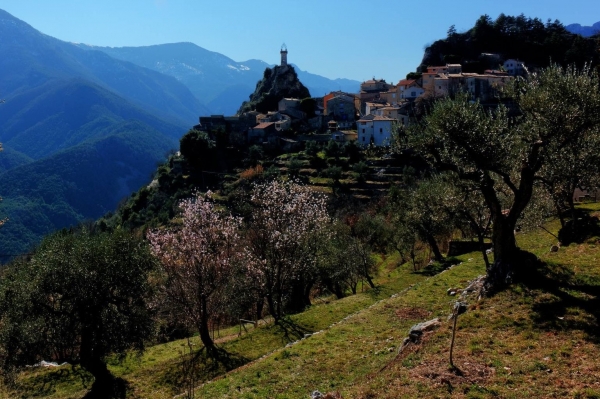 Sigale is a sleepy little village in a very picturesque setting, sitting on a rocky outcrop high over the Esteron river. It's located 34 km west of the Pont Charles-Albert on the Var river north of Nice. From the pont (bridge) the road goes up and past Gilette, then along the green-forested Esteron valley, past Pierrefeu and Roquesteron. After Sigale, the road curves north past the Clue du Riolan and over the mountains to Puget-Théniers. his was once a fortified village, positioned high over the junction of the Riolan river, flowing southeast down through the Gorges du Riolan, and the Esteron river. Remnants of the ancient fortifications include two 14-15th century towers. A key attraction is the 19th-c Tour de l'Horloge, a beautiful tall, square bell tower with campanile that stands high above the village on the southern edge, overlooking the valley. The 12th-century Romanesque Eglise St-Michel [photo-7] has an interesting bell-wall with three bells. The church was enlarged in 1516 and is well restored.The village centers around the 12th-century Romanesque Eglise St-Michel [photo-7], with its triple bell-wall, and the nicely decorated Mairie (town hall) with its 16th-c fountain and ancient lavoir. distance from nice, 47 km from Nice, private transport needed