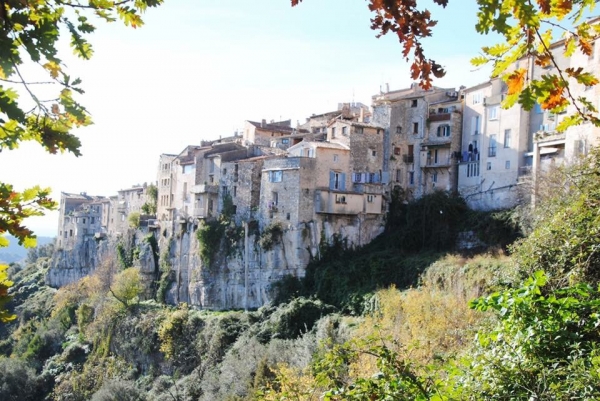 Tourrettes-sur-Loup is a perched village situated in the Alpes-Maritimes, a little way north-east of Grasse and west of Vence, and just a short way inland from the major coastal resorts of Cannes and Nice. It is in a very picturesque setting surrounded by wooded hills and valleys. Your first highlight is the view of the village as you approach from Bar-sur-Loup. From the Place de la Liberation you can pass through an old stone gateway to explore the heart of the old town. The town has an attractive medieval centre, strung out along the top of the cliffs of a rocky outcrop that at one time acting as a defense wall against possible attacks. There is little in the way of 'major' monuments to discover - the 15th century Church of Saint Gregory in Place de la Liberation and just outside the historic town is the most important - but don't let that deter you, for Tourrettes-sur-Loup is a pleasure in itself with a myriad of passageways and alleys passing by the ancient stone buildings. The most unusual feature about the Church of Saint Gregory is its use of more ancient stones, some of which feature engravings and reliefs. See in particular the stone with an inscription dedicated to Mercury that dates from Roman times and is now part of the altar. Continue passed the small 15th century chateau in Place Maximin Escalier (now home to the mairie) and along to the viewpoint and 'table d'orientation'. Here you will find lovely views across the countryside beyond the ramparts. From here you can return to the main square along the Grand Rue that leads to another stone gateway next to the medieval belfry and tower. The tower has its origins in the 12th century although most of what we see today was built in the 15th and 16th centuries. Largely now focussed on tourism, Tourrettes-sur-Loup has an extensive selection of artisans selling their products in the town, along with a selection of cafes and restaurants. Back in the Place de la Liberation follow the small Rue de la Bourgade behind the church to see a 19th century oil mill and the small aquaduct that supplies the waterfall for the mill to operate. Also in the Place de la Liberation take a look at the lavoir. Distance from Nice : 27 Km, Can be reached by local bus.
Be the first to comment!