Spend the day visiting vineyards in the world-famous Côte de Provence. This outing is everything you might expect from Provence... Old stone, olive groves, cypress trees and seemingly never ending neat rows of vines. The Côte de Provence wine growing region covers roughly 50,000 acres and is best known for its quintessential Southern French Rosé wine ( 85% of the overall production ). The two vineyards we have selected for our wine tasting tour are elegant, prestigious and ooze Provencal charm. It's always a pleasure to introduce our clients to them.

An hour’s drive into the natural beauty and tranquility of the Var region will take you to a perfectly manicured, formal, French garden leading to an old stone Château set in the midst of a magical estate, where thoroughbred horses graze, and neat rows of vines extend towards the distant Esterel hills.

Mr Massa, the owner and founder of Château Font du Broc, is a French success-story. Not satisfied with being a talented and accomplished businessman, Mr Massa, as well as producing wine that has earned a place on many Michelin starred restaurant menus, also turned his hand to breading Olympic champion horses.

After soaking up Chateau Font du Broc’s relaxing atmosphere and taking your time to taste their wine, we will introduce you to the nearby village of Les Arcs where you may order a tasty meal at a little local restaurant (meal not included). Followed by a stroll through the medieval streets of the village to help you digest.

Last but by no means least, we will take you to the beautiful Chateau Sainte Roseline winery, a property built on land first inhabited by a Xth century hermit. Later it became an Abbye long before the first vines were planted in XIVth century, making it one of the oldest vineyards in Provence.

This Château is not only a prestigious winery, but also a beautifully preserved sacred site steeped in history. Pilgrims still flock here several times each year to the Chapelle and cloisters which are spectacular in their own right.

There are no reviews for this property yet.

This tour is for you if you...

Seasonal availability: All year round

Your holiday time is precious.

Our team here to help you get the very best out of your sightseeing time on the French Riviera.

We believe that one size CANNOT fit all, all of our itineraries can be adapted to your specific interests and pace.

We have a wealth of knowledge about the French Riviera at our fingertips and our extensive on the ground experience enables us to create and adjust daytrip itineraries so that we can take you straight to the places you’ll love the most. No disappointment or time wasted.

at approximate 0.00 miles
Prices from 0
A Taste of Provence

at approximate 0.00 miles
Prices from 0
In The Footsteps of Artists

at approximate 0.00 miles
Prices from 0 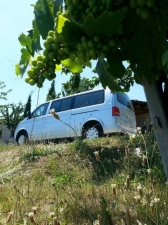