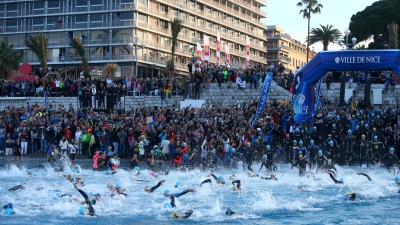 Sunday, June 24, 2018 is the date for the Nice Ironman: an ultra-endurance race of insane proportions for mega-jocks (of both sexes), where they start the day by swimming 2.4 miles (3.8 km) in the open sea, then bike over mountains for 112 miles (180 km), and full marathon of 26.2 miles (42 km). The Ironman is an amazing and inspiring event to behold, as thousands of people push themselves to levels beyond reasonable. Started in Hawaii in 1978 almost on a dare, 5 buddies decided to see who was the fittest by combining the three toughest races on the island, the Waikiki Roughwater Swim, the Around-Oahu Bike Race, and the Honolulu Marathon into one. Now competitions are held around the world (Nice is the official Ironman in France), and the top qualifiers win a place to compete in the legendary Hawaii Ironman in October (where the marathon portion is run through blazing black lava fields. So come down to the Prom (Plage des Centenaire, across from the Theatre de Verdure) around am to witness the dramatic and breathtakingly beautiful 6:25am splashing start against the backdrop of the pink-tinged dawn. It’s not long before they reemerge from the sea to jump onto their waiting bike a transition with the precision of a ballet. Several hours later they’re back on the Prom to trade bikes for running shoes, and then they run to the Airport and back… four times! The winner should be crossing the finish line around 3pm, but all the rest will arrive all evening long, and to be considered a finisher, the rules state that midnight’s the limit. Nice, France, has recently been named the location of the 2019 IRONMAN 70.3 World Championship. Come race, and preview the area before you set out to qualify! Click here to read more. With its mix of old-world opulence, year-round sunshine and stunning seaside location, Nice is the unofficial capital of the Côte d’Azur. A magnet for beachgoers and high-rollers since the 19th century, this coastal city has fabulous markets, an enticing old town, glorious architecture and a wealth of high-end restaurants. If you really want to soak up the Riviera vibe, there’s no better place. source : https://eu.ironman.com/
Be the first to comment!