Daniel Ducruet present in Monaco at his son's wedding, 23 years after the devastating pool sex scandal. 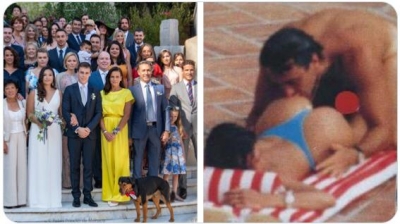 Princess Stéphanie , ex husband Daniel Ducruet finally returned to Monaco only for the his son's wedding, Louis Ducruet, on Saturday July 27 th 2019 and hold at Monaco's cathedral on Saturday.

Louis, 26, who is also the grandson of Grace Kelly, wed his college sweetheart Marie Chevallier, in the civil ceremony on Friday.

The couple were married by Monaco's mayor George Marsan and they then had an informal garden reception in the Prince’s Palace.

This event was the first official appearance of Daniel Ducruet in the principality of Mack after his divorce back with Princess Stephanie in September 1997.

Ducruet's infidelity with Muriel "Fili" Mol-Houteman, Miss Bare Breasts of Belgium 1995, was photographed by the paparazzi and the images were published in the Italian tabloids Evatremila and Gente.[7Ducruet said that he was set up At the height of the scandal, a 90-minute video of the Ducruet's encounter with Houteman sold in Italy.When the story made headlines, Ducruet fled to Morocco

Back to the fact at beginning in July 1996, Princess Stephanie shocked Monaco and French high society when she elected to marry her bodyguard, ex-fish wholesaler, Daniel Ducruet. The proposed marriage had provoked bitter rows within the Grimaldi family, with Prince Rainier refusing to accent a "commoner".

In the end, Prince Rainier appears to have given his consent against his better judgment, influenced no doubt both by the intervention on Stephanie's behalf of her brother, Prince Albert, and the not irrelevant consideration that 31-year-old Stephanie already had two children by Ducruet, Louis (3) and Paolina (2).

In the year since his marriage, Daniel Ducruet (31) appears to have kept busy making full use of his new-found influence in Monaco to set up various business concerns including property companies, a restaurant, an ice cream parlour and an agency which specialises in providing bodyguards and protection for VIPs. In the last year, too, he has continued to pursue a motor racing career that has been largely sponsored by his wife.

It was this passion for motor racing which inadvertently led the paparazzi onto the trail of what Eva Tremila modestly calls "the greatest scandal ever seen". Photographers covering the July Spa-Francorchamps 24 Hours race in Belgium, in which Ducruet was competing, noticed a certain Fili Houteman in the paddock.

uring two days of practice sessions, Ms Houteman (26), a former "Miss Naked Breast of Belgium" and a night club artiste whose nom de plume is "Sharon", appeared to be more than usually friendly with Ducruet. What really aroused the photographers' suspicion was that on the day Princess Stephanie arrived to see her husband race, Ms Houteman was nowhere to be seen.

That trackside spotting prompted the photographers (they claim) to keep a close eye on the movements of Daniel Ducruet, eventually following him to his poolside rendez-vous on August 5th with the same Ms Houteman in a luxurious villa at Cap de Villefranche, just five kilometres from Nice and 15 from Monte Carlo.

The photographic account of the encounter provides the sort of documented evidence which means that, whatever else Daniel Ducruet has found to tell his publicly outraged wife, he can hardly suggest that he and "Miss Naked Breast" were "just good friends".

We see Ducruet arrive poolside in a teeshirt and jeans, being warmly greeted by the topless Ms Houteman. Between a glass of wine and a cigarette or two, the pair move into a series of athletic embraces which ends with both of them naked and about to ... At that point, even Eva Tremila decides that the point has been made and turns off the camera.

ADDING further spice to the scandalous argument was this week's second offering from Eva Tremila which proves that Ms Houteman and Ducruet were not alone poolside, but rather accompanied by another unnamed couple who also found - better things to do than read Le Figaro.

Given all of that, it hardly comes as a surprise to learn that Princess Stephanie moved out of Monte Carlo last week to the family country house "Le Ranch" where she has been so distraught that she has lost over a stone in weight. In the meantime, her father is reported to be considering abdication.

Prince Rainier no doubt regrets having consented to the marriage to Ducruet, a man who has had four children by three different women in the last six years. It is likely that he will now force Princess Stephanie into a difficult choice - divorce from Ducruet or banishment from the court of Monte Carlo.

Prince Rainier now apparently feels that his children, in particular Stephanie, were spoiled by the "American" style of hands off education imposed on them by his late wife, Princess Grace. Princess Stephanie's skirmishes with drugs, a rock `n' roll career and, most notably, her alleged involvement in the death of Princess Grace (media reports speculated that Stephanie was driving the car in which Princess Grace died) may prove the point.

What is certain is that this latest scandal will do little good for the already tarnished image of the ruling family of the tax haven that is Monte Carlo.

Ducruet has since launched a career as a singer releasing two albums, Pourquoi Pas and Jamais personne, with little success. He also wrote a book about his life with the Grimaldi family.