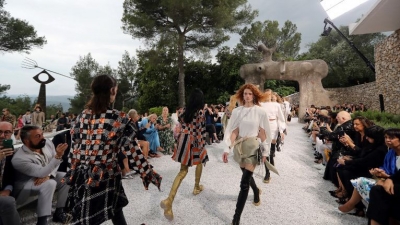 Vuitton has presented its "cruise" collection in the heart of the foundation, surrounded by works of art. An exceptional moment that silences the controversy with the granddaughter of Aimé and Marguerite Maeght. Lot's of people on may 27 th 2018 for Louis Vuitton's "Cruise" show at the Maeght Foundation in Saint-Paul-de-Vence. actress Jennifer Connelly, but also Emma Stone, Isabelle Huppert, or Léa Seydoux. After Japan last year, the artistic director of Louis Vuitton, Nicolas Ghesquière chose this hilltop village of the Côte d'Azur, St-Paul-de-Vence for this collection presented between two Fashion Weeks. The Maeght Foundation was opened in 1964 by two art merchants Aimé and Marguerite Maeght, it houses a large collection of paintings, sculptures and graphic works of the twentieth century (Balthus, Bonnard, Braque, Calder, Chagall, Giacometti, Leger .. .). A triSt-Paul-de-Vence: When art and fashion come together for the Vuitton show at the Maeght Foundationbute for an exceptional place I wanted to pay homage to this place, which I like very much, and to the history of the Maeghtsaid Nicolas Ghesquière, head since 2013 of the artistic direction of Louis Vuitton. This is really place that represents for me the genesis of the foundations of art, it is a love story between a family, artists, architecture explained the creator. Louis Vuitton presents the 2019 Cruise Collection by Nicolas Ghesquière at the Fondation Maeght in Saint-Paul-de-Vence, France. Music: “On Then And Now” by Woodkid. Featuring Jennifer Connelly reading extracts from the biography “Grace: A Memoir” by Grace Coddington. Source : https://france3-regions.francetvinfo.fr
1 comment